“Non-Cyclist” Passes Through Cariboo On Way To Guinness World Record

UPDATE! On April 22nd, 2017 JaBig Completed his journey to the Arctic Ocean and set the Guinness World Record for the longest journey on a fixed gear bike (ie-1 speed). 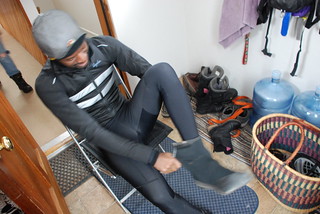 Though he has notched nearly 15,000 kilometres on his fixed gear bicycle over the past

year, battling some of the country’s most unforgiving highway terrain in life-threatening

“I’m just a cycling DJ,” the 37-year-old shrugs, on a recent stopover in the South Cariboo.

longest journey on a bicycle within a single country, when his tally reached 14,667

Montreal headed for the Atlantic Ocean. Once he reached the East Coast he headed

west for the Pacific, then due North where he is currently pedalling towards Northern B.C.

He hopes to reach the Arctic Ocean – more specifically Tuktoyaktuk – by April.

Life on the road, with little more than a cell phone, water bottle and a few extra layers for

when the temperature drops has become routine for the Rwanda native, who has lived in

“It’s almost become my nine-to-five,” he explains. “I know I have to get up, plan my next

day’s ride, make sure I have accommodation, update my social media to let all my friends

and family know I’m OK, and plan ahead.”

The idea for the record-breaking ride came to JaBig practically on a whim, after he had

After four months and 6,000 kilometres under his belt, he realized he had cycled the

distance from Vancouver to Halifax.

Setting out to do the real thing, however, JaBig was greeted with plenty of skepticism

“All of my friends, they thought I was on a suicide mission,” he laughs.

uncertainty that it could not be done.

“At that point, it became a challenge. I don’t like to be dared,” he said.

turn, relying on those with more experience and social media followers who have offered

tips and tricks for ways of addressing problems along the way.

– he says the journey has been an “amazing collaborative effort.”

“I’ve also proven that although it has been complicated, for me, I’ve been able to find a

treks across the country.

“That idea around the world that Canadians are super nice… I can say it is definitely true,”

While he has his short-term sights set on reaching the Arctic within the next two months,

JaBig says he can’t help but planning his next adventure.

“One week into my trip, I realized I was hooked,” he says. “Now the question is, not what

next, but where next.”

South Point Resort : An all season resort to watch

New Owners Give The Canim Lake Resort & Campsite A Massive Upgrade Nestled into a forested point on a sandy Canim Lake beach, you will find South…

New WildSafeBC Coordinator for the Cariboo

Poll: Developing A New Economy By 2020

Past Present and Future on crossroads sign arrows isolated on white background Poll: Developing A New Economy By 2020 Recent mill closures have left the South Cariboo…

Giving back to the community while having fun is how Lori-Lyn Graham describes the EdgeFest 2019 festival.  Lori-Lyn and Dave have schedules don’t allow them to attend…

Most from this category

New WildSafeBC Coordinator for the Cariboo

South Point Resort : An all season resort to watch

Canada Day In The Cariboo

A Warm Spring Welcome For The Arts In 100 Mile House